Streaming/Recording Only Game Sound on Linux

This is an English translation of my Japanese blog post, including some updates.

When streaming or recording games, for example by OBS, you may be listening to BGM or connecting to VC on discord (or something similar). In such a case, you may want to avoid BGM or VC sounds being streamed/recorded. In this post, I'll share the way how to configure linux sound system in such a case.

The method written in this post enables the following things:

System and Software in Example Setup

There are some methods to accomplish this:

In recent distributions/desktop-environments, usually pulseaudio will be installed and enabled by default. If not, install it via your package manager.

pavucontrol is used for output control of pulseaudio on GUI.

At first, check the name of the default output.

Run the below command in terminal:

This is an example output of mine:

There should be some lines including index: <number>, so make a note of the desired destination name from the name: <name> field just below the index line. In my case, it should be alsa_output.pci-0000_00_1f.3.iec958-stereo. You can also use index number for this purpose, but this number might be changed, so avoid it and use the name field.

pulseaudio loads configuration from ~/.config/pulse/default.pa if exists. If not this file exists, make it by yourself.

Make or edit default.pa as below:

Usually, by the above command, pulseaudio will be killed and then automatically restart, but if not restart (you can check it by opening pavucontrol and if it shows outputs as usual), manually restart it by the below command:

Or, simply restart the PC.

If there is no misconfiguration in the config file, pulseaudio will start correctly.

Then check if the new null-sink is properly added to on pavucontrol. Open pavucontrol and go to "Playback" tab, then you'll see "Loopback from Monitor of Null Output" is added. If not shown, confirm that Show: field on the bottom is selected as All Streams.

Furthermore, check output of the loopback is set to the default output defined in the above config file.

If pulseaudio is configured properly, pavucontrol's playback tab will look like this: 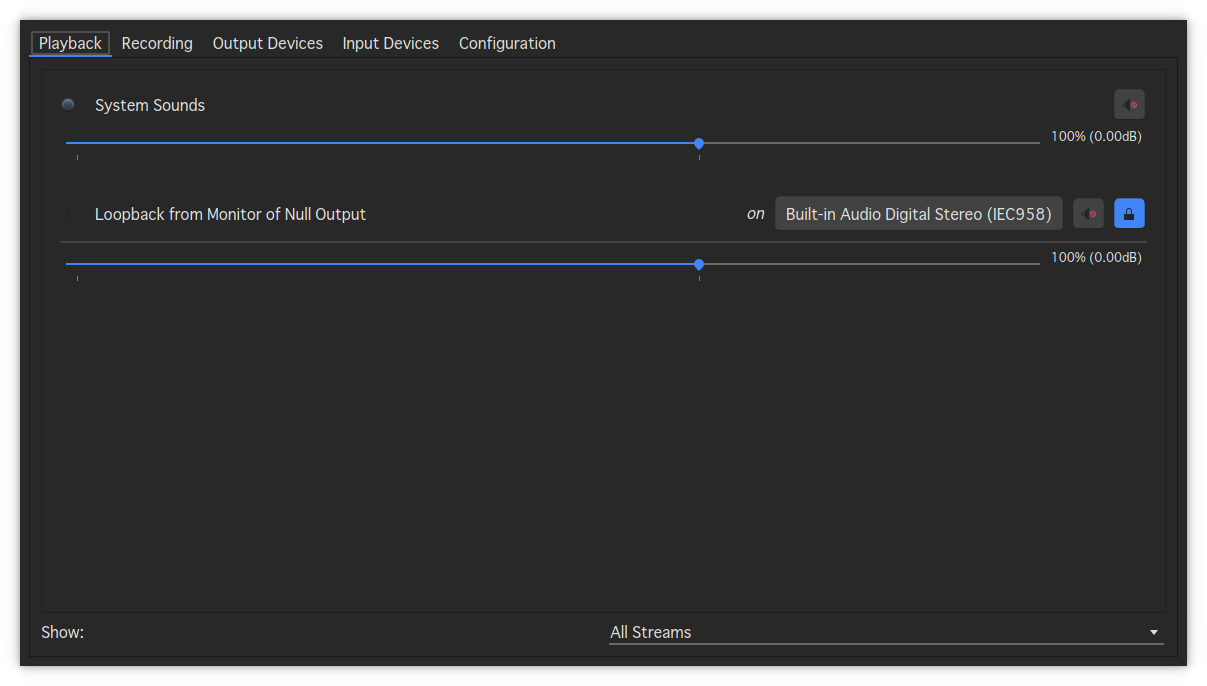 Then launch the game. In this post, use NieR:Automata on Steam as an example.

After launching the game, you will see the new game output(s) on the Playback tab on pavucontrol. Next to the game name (in this case it's "NieRAutomata.exe"), there should be a selector of the output. Select the name of the null sink created in the above section (with the above example configuration, it should be OBSSink). If pulseaudio is configured properly, you should still hear the game sound after changing the game output to the null sink. 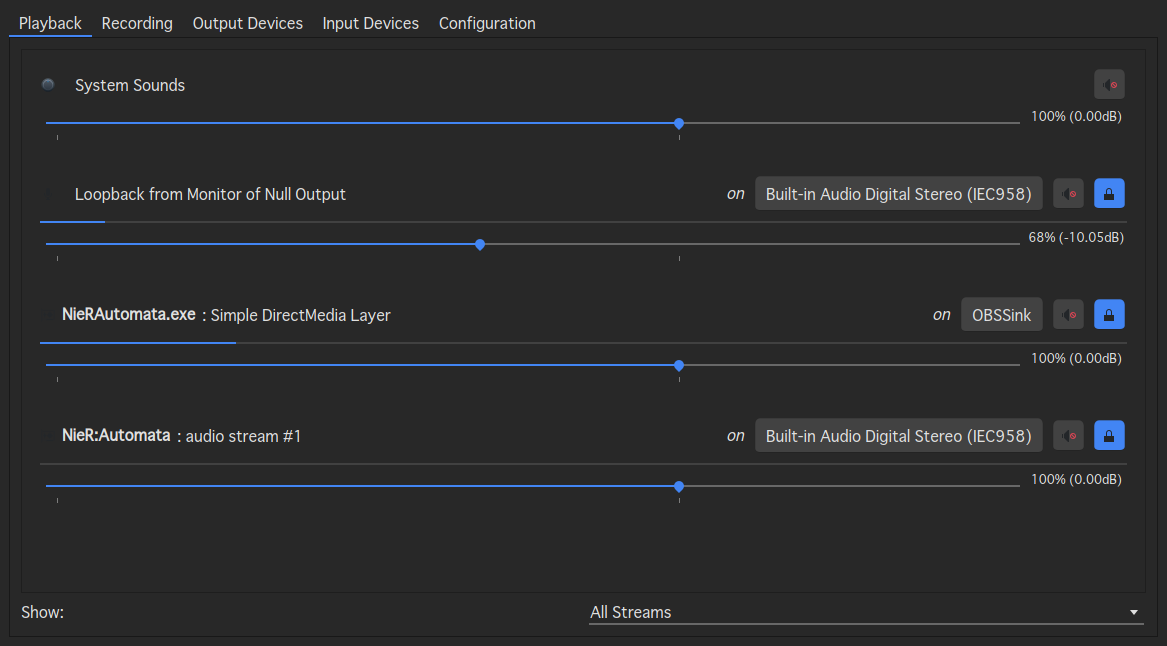 Additionally, it's better to confirm here that other application's outputs are not connected to the null sink. If connected, they will be mixed into the streaming/recording. If you are using desktop application version of discord client, make sure it's configured to use output other than the null sink on its own configuration window.

I skip details of the way how to capture the game on OBS since it's same as the case of Windows OS. Simply add "Window capture" in "Sources" and select the game window.

By default, OBS captures all sounds from pulseaudio's default sink, so you need to mute this. In "Audio Mixer", there should be "Desktop Audio" by default, click the speaker icon and mute it.

Next, configure OBS to capture the game sound. From "Sources", add "Audio Output Capture (PulseAudio)" and select "Create New" and add it with your preferred name. Then device selection window should open, select the name of null sink added in the above section (it's OBSSink in this example). You'll see a new sound capture in the "Audio Mixer" with the name you added.

In this method, you can change the volume of the game which you hear and which is streamed/recorded.

This is not difficult. Open pavucontrol with the game launched, then change the volume of "Loopback from Monitor of Null Output" in the "Playback" tab. If you want to mute the game sound you hear, simply mute this.